Solid pins and spring sockets for electrical & electronic connectors are a widely accepted technology. Round pins are traditionally plugged into a variety of spring socket designs ranging from stamped and formed “box” contacts, to machined/bifurcated “slit & crimp” military style contacts, to sockets comprising a machined tubular body with a stamped spring insert.

Hyperboloid wire cage sockets have been around for over 50 years, and are recognized as having superior performance to traditional stamped or machined spring sockets. QA has re-invented the hyperboloid contact design, resulting in the potential to doublethe pin density of a connector.

QA Technology Company, based in Hampton, NH, is well known as the premier manufacturer of spring loaded test probes that are used by the printed circuit and electronics industries world-wide. 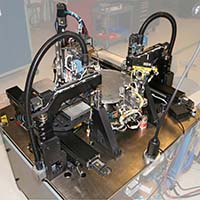 After 30 years of experience in the design and automated assembly of long-life electronic interconnects, QA has leveraged these skills to develop a family of hyperboloid socket contacts using a novel method of capturing 6 or 12 contact wires inside a thin wall tubular sleeve. QA’s integraMate® family of contacts accept pins of Ø 0.4, 0.45, 0.5, 0.6, 0.7, 1.3 & 1.5mm. More sizes are to be introduced shortly. QA’s flexible production equipment permits the automatic assembly of contacts with a wide variety of termination options for each contact size.

Low and uniform insertion and extraction forces: Enables high pin count connectors to be plugged together by hand without the need for additional hardware. The hyperboloid wire cage geometry exhibits unilateral forces: insertion force is the same as extraction force. Typically these forces are 2 ounces per contact.

Self cleaning: Smooth wiping action of the wires on the pin removes any surface contaminants and oxides which would appear as high or irregular contact resistance. Normal contact force of each wire to the mating pin is maintained at a minimum of 30 grams, typically 52 grams per wire.

Long cycle life (Durability): Smooth tangential mating of the pin with the contact wires shows minimal wear of the gold plated surfaces. integraMate contacts have been tested to 100,000 cycles with less than 1 milliohm increase in contact resistance.


Minimal power loss (Current Rating): Low electrical resistance due to the six or twelve wires in contact with the circumference of the mating pin. This increases the current carrying capacity relative to the size of the mating pin. Typically 4 amps for 6 wires contacting a Ø0.6mm pin and more than 12 amps for 12 wires in contact with a Ø1.5mm pin.

Resistance to shock and vibration: Low inertia of the contact wires in contact with the mating pin prevents circuit discontinuities under the stress of mechanical shock and vibration. Tested to 500Gs shock (3 bi-directional shocks in each of 3 axes, 18 shocks total) and 43.92Grms random vibration (45 minutes in each of 3 axes) with no discontinuities greater than 10 nanosecond. The most severe form of mechanical stress is random vibration as experienced in vehicular applications.

Resistance to fretting corrosion: In addition to circuit discontinuities,random vibration can induce several million cycles of micro-motion which can rapidly wear the plating at the contact points (fretting corrosion). Temperature cycling and differential thermal expansion can also produce micro-motion and induce fretting. Fretting corrosion is the microscopic wear of the gold plating, even through the nickel underplate and down to base metal. The localized heat generated by friction during random vibration will often oxidize the metal substrate followed by an increase in contact resistance and even contact failure (open ciruit). integraMate contacts have endured random vibration and 250 thermal cycles (0°C to 100°C) with no change in contact resistance greater than 2 milliohms.


Applications: For use in high reliability connectors where there is a need for low mating forces, high cycle life and resistance to shock and vibration. Typical applications are medical and dental equipment, scientific and portable instruments, industrial equipment, transportation, ATE interfaces, military and aerospace electronics, telecommunications.

Background: Since their invention in the late 1950s, hyperboloid socket contacts have earned a reputation as a technically superior solution for the separable interface of high reliability connectors. Originally invented and patented by Francoise Bonhomme, the hyperboloid socket technology was licensed to and successfully manufactured for many years by several connector manufacturers in Europe, the UK and in the United States. Hyperboloid socket contacts use a wire cage to make contact with the mating pin at multiple points around the entire circumference, resisting any discontinuity from shock or vibration. The smooth wiping action of the hard gold plated wires against a similarly plated pin during mating results in minimal wear and insures a highly reliable and stable connection. For the same reasons, insertion and extraction forces are much lower than for conventional contact systems. The original patent(s) for hyperboloid contacts expired long ago. However, until the present time, the difficulty of manufacturing the contact system and the large diameter of the contacts have acted to limit the use of this technically superior contact system. Recently, QA Technology Company introduced the integraMate® line of hyperboloid socket contacts featuring an innovative new design concept that results in a form factor up to 30% smaller than traditional hyperboloid contacts. integraMate® contacts were designed to be incorporated into connectors on center distances previously only possible with conventional contact systems.

Traditional hyperboloid sockets utilize a carrier tube to support the contact wires within an outer tube to form the contact assembly. They are assembled by wrapping the contact wires around the ends of the carrier tube and then “sandwiching” the wires between the inner and outer tubes using a press fit. This form of construction acts to increase the diameter of the contact (versus conventional screw machined contacts or integraMate® hyperboloid contacts) because it “stacks up” four successive concentric layers of wire and screw machined tubes. A criticism leveled at “traditional” hyperboloid contacts is that they do not usually have an effective lead-in to protect the contact wires from being damage by a misaligned or bent mating pin. The system also depends on press fitting several very accurately dimensioned (and expensive) screw machined parts, a very “tricky” proposition. Nevertheless, traditional hyperboloid contacts offer low insertion force, resistance to shock and vibration and durability of up to 100,000 cycles, easily distinguishing themselves from more conventional contact systems. 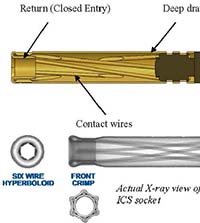 utilize a single wall, deep drawn tube with an integral “return” providing both the outer tube and the support for the contact wires in a single layer. During assembly, the contact wires and a screw machined termination are attached to the deep drawn tube by carefully controlled crimping, eliminating the need for difficult press fits. The integraMate® system was designed to allow broad flexibility in the design of the terminations and to have a form factor similar to a high quality hooded, bifurcated screw machined contact. In addition to supporting the wires, the “return” also acts as a closed entry to pre-align the mating pin before it comes into contact with the wires. integraMate® contacts offer all of the advantages expected from a hyperboloid contact, however they are about 30% smaller in diameter than traditional hyperboloid contacts, have fewer parts and have a closed entry to better protect the contact wires from damage. They are manufactured using state of the art automation with in-process vision inspection.

Example: The trend in the electronics industry toward miniaturization has created a demand within the medical and mil-aero connector markets to increase the density of interconnect systems while maintaining or improving cycle life and reliability and not adversely affecting mating force. To this end, both traditional hyperboloid contacts and integraMate® hyperboloid contacts have been introduced for mounting on 1.27 mm (0.050”) center spacing. To accomplish the necessary size reduction, traditional hyperboloid systems are now offered in a new smaller size. The mating pins for these new contacts is only 0.3 mm diameter, 25% smaller than the 0.4 mm pin used in the previous smallest hyperboloid contact. In comparison, QA Technology’s integraMate® technology allowed meeting the target for center distance, without the need to reduce the pin diameter. Therefore the integraMate® ICS40 socket can mate with widely used and much stronger 0.4 mm pins. The outside diameter of the ICS40 socket is actually about 40% smaller compared to a traditional design 0.4 mm hyperboloid socket, allowing them to be used in connectors with center distances as dense as 1.0mm.